Four freshmen running varsity track races and breaking school records, something that Coronado had never seen before. Senior runners, Emma Czerwinski, Logan Lucas, Taylor Lauten, and Sara Dort have been leaving people in awe for over three years with their talent both on and off of the course.

Known as the Cor (standing for Coronado) Four these girls have been a unit since they all started running together in the 4×8 their freshman year on the varsity track and field team. What makes them so unique and a stand out from the crowd is how close knit the four are not only as a team but also as best friends.

“It’s a lot easier running in 117 degree weather with my best friends by my side. We all push each other and support one another on our good days and bad days,” Lucas

Originally they played soccer and decided that running would be a good way to get in shape for the soccer season but then realized where their true talent was.

Czerwinski, Lucas, and Dort all ran on the cross-country team in 2010 and then convinced Lauten to quit cheer and run with them the following year.

Freshman and sophomore year the girls won the regional title all together for the 4×8 in track. Last year they made it all the way to the top and won state for both cross-country (being top four out of the five runners for Coronado) and the 4×8 for track.

Although track and cross country are both running based, with cross country the girls focus more on their personal records and goals while still running for Coronado. The stronger team mentality shows through when they run the 4×8 in track.

“When I’m running in a 4×8, I’m not thinking of myself, I am only thinking of how I can help Logan, Sara, or Emma to win,” Lauten said.

As a pre-race ritual, the girls all gather in a circle and hold the baton where Lauten says a prayer and they chant “Today’s the day, this is the team, and nobody can beat us.”

With all the hard work that has been put in over the past three years, the girls are hoping to end their high school running careers as champions again and most importantly, together.

“We obviously are hoping to win state again this year by working harder than we ever have before. Arbor View is looking really strong, but we are hoping that our hard work is enough to win again,” Czerwinski said.

As well as working hard in their sport, the girls also work hard in their academics. All four take honors and AP classes. Each one is also very involved in the school and extracurricular activities, with Czerwinski in yearbook, Lucas and Lauten are members of National Charity League, and Dort mostly focuses on her health and nutrition.

Whether they win or not, these four will always be a unit. As of now, it looks as if they will be attending different colleges next fall and are just looking to make the best of senior year.

“In our dream world, we will have a beach house that we all come back to on any breaks from school and during summer and act as if nothing ever changed,” Dort said. 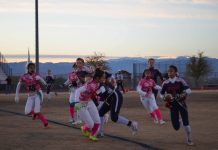