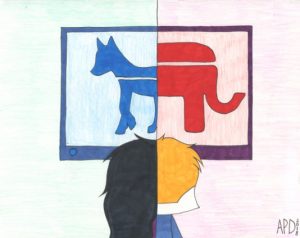 Americans have always fought for what they believed in. Whether it is combatting tyranny during our revolution, going to war with ourselves to abolish slavery, or marching for civil rights. Yet, only 37% of Americans voted in the 2014 Midterms.

Midterm elections occur in the middle of a president’s term four-year term/ every two years, and they determine all 435 seats of the House of Representatives and about one-third of the Senate. Although early voting ended on Friday, Nov. 2, county residents can still vote on Election Day, Tuesday, Nov. 6.

Politics can become very complicated and even boring at times, and voter apathy is a big problem in this country and one of the main reasons for low voter turnout. Here are some of the top movies that review the history of American politics in an exciting way, to foster greater interests during this political season.

Steven Spielberg’s “Lincoln” (2012) shines a new light on the sixteenth United States president. Similar to today but on a more extreme level, both Democrats and Republicans were at a divide over the topic of slavery in the 1860s. The North supported the newly-formed Republican Party who disagreed with the heavily Democratic South’s stance on slavery. The two parties were in such a feud with each other that on April 12, 1961 Civil War broke out. Abraham Lincoln was many things; he was the first Republican president, the Chief Executive during the Civil War and the man who freed the slaves. Lincoln also set many things into motion like the 13th, 14th and 15th Amendments to the Constitution. Unfortunately, he was assassinated before he was able to see the outcome of everything he fought for during his presidential term. “Lincoln” follows the president through his grief of the rising Union Army death counts, and the stress of keeping the country intact. “Lincoln” was given a Rotten Tomatoes score of  89%.

Katya von Garnier’s “Iron Jawed Angels” (2004) follows the women’s suffrage movement in the early twentieth century. Before 1920 women in the United States were not allowed to vote, but a group of protesters formed, quickly spread throughout the country, and changed many opinions. One of the most recognized women of the movement was Susan B. Anthony; however, this film follows the story of Alice Paul, a single educated young woman who brought the suffrage movement to the forefront of the public’s attention. Giving women the right to vote gave them a voice to speak on matters that affected them at home and at work. Today, women make up the majority of voters. “Iron Jawed Angels” has a Rotten Tomatoes audience score of 89%.

“Selma” (2014) captures the horror and racism that existed in the southern United States during the mid-th century. Although the Civil Rights Act of 1964, a law that gave all races equal rights in the U.S, officially desegregated the south, many black people were still denied access to the polls through laws such as expensive poll taxes and ridiculously hard literacy tests. This film follows Dr. Martin Luther King, Jr. (David Oyelowo) and other activists on their walk from Selma to Montgomery, Alabama in protest of such discriminatory laws. It was a walk so profound that when Lyndon B. Johnson (Tom Wilkinson), the current president of the time, witnessed it on television, he was moved to sign the Voting Rights Act of 1965 in to law, which outlawed literacy tests, poll taxes and other devices used to stop racial minorities from voting. This award-winning film received a Rotten Tomatoes score of 99%.

Fear of a Black Republican

The 2011 documentary by Kevin Williams was created under President Barack Obama’s time in office (2009-2017). Democrats are the most loyal demographic to any political party, and in 2008 Obama won 86% of the African-American vote. With this being said, more competition arose from the Republican party to get the black vote. In this documentary, Williams goes throughout major urban cities in 11 states to hear the  opinions from people of different ethnicities who voted the forty-fourth president into his first term. This film encapsulates interesting current events as more black celebrities are now identifying with the now 13% of the black community who approve of President Donald Trump, including Kanye West, Dennis Rodman and Mike Tyson. “Fear of a Black Republican” was given a Rotten Tomatoes audience score of 100%.

Movies, being a form of media and entertainment, have the ability to inform the public and even sway their political stances, but do not rely on the media to tell you what to believe. Instead,  allow these movies to inspire your political activism. Your voice is in your vote.

It’s important to educate yourself on people running for government outside of entertainment and media platforms as well. Make sure you are knowledgeable about politicians, referendums, initiatives and judges because the results of this election will affect your life, family and community. Head to the polls and vote because your vote can either maintain or change the path the country is taking right now.