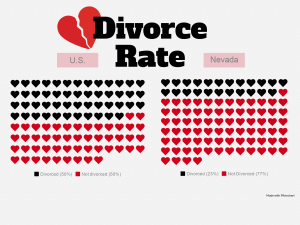 A teenager talks to a friend on the phone while the faint yelling in the background between her parents grows louder and louder. The teen hangs up so her friend won’t hear the conflict that rings through the house. The constant fighting between the parents causes an emotional episode, the teen breaks down and cries. The arguments only continue in family court where the process of divorce is not finished until the custody of the teenager is determined.

According to the American Psychological Association, the divorce rate in America is 40-50 percent while in the state of Nevada 21.3 percent of every 1,000 people married winds up in divorce (24/7wallstreet.com). These numbers indicate that half of the country has had at least one failed marriage. Thousands of kids across the nation live with divorced parents.

“It is kinda hard to talk about things my family does together with some of my friends that have divorced parents,” Kailee Kong, junior, said. “I just watch what I say for their sake. Especially for holidays.”

When parents with teenagers divorce, according to verywellfamily.com, roughly 20-25 percent of them experience problems stemming from the change in the family. Some of these problems include substance abuse, increased stress, trouble sleeping  and academic problems. These issues can stem from teenagers thinking that they were the reason that their parents split up. They may think that they are already a “mistake” and go downhill from there.

Trails Carolina, a teen mental health and social behavior website, works to help teens experiencing issues caused by divorced parents. “Older teenagers can look back and feel like they were living a lie – that this family life they had grown up with and perhaps never questioned was something their parents were just waiting to break up when they went away to university,” Angharad Rudkin, clinical psychiatrist, said.

Divorce is not just about negatives though; there can be positives about having divorced parents as a teenager, too. Divorce can teach valuable life lessons. When the parents remain friendly towards one another in the audience of their children, they are taught that relationships which turn sour do not have to be unsalvageable. The tension between the parents and children may ease up as well with them not being in the same house and being forced to endure argumentative shouting. The children will have two separate parents to go to for holidays, meaning that they may get to celebrate twice.

“The good thing about my parents’ divorce was that I get the two birthdays, two Christmases and two sets of siblings I guess you could say,” Allyah Bride, sophomore, said.

Divorce has two sides when it comes to effect, neither of them outweigh each other. While divorced parents may be becoming the new norm, it’s not bad to have a divided family.