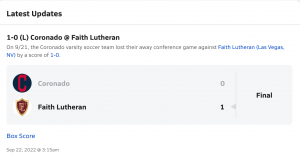 Coronado’s varsity football team had a home game on Friday, September 23rd, before the homecoming bash. The Cougars took on Bonanza  with a final  score of was 49-0, which  made the night even more exciting for Coronado High School.

“The game itself was a little bit hectic,” Sophomore Joemay Tamita said.  “A lot of the students were sure that we were going to win and constantly cheered on the players throughout the night, but I think that really helped them continue to play to the best of their abilities.”

The game was a very fun and exciting time for everyone that went because it was finally the night for not only the game, but also the tailgate and the homecoming bash itself. Many students showed their cougar pride and cheered on the team no matter what conflicts happened during the game.

“I had a lot of fun during the game,” Senior Preston Mcqueen “All of my teammates were excited for this game, I was a bit nervous about it at first but once I got out of the field and the game actually started I felt really excited and energetic and I’m glad that everyone who went really supported the team.”

Coronado’s varsity golf team had a game at Reflection Bay on Tuesday, September 20th. The game was against multiple schools such as Palo Verde, Arbor View, Faith Lutheran, and Green Valley. Coronado received a score of 288 and achieved  first place.

“It was pretty tough because the wind was very strong that day, but the team held on and played very well even with the weather conditions being a bit poor.” Junior Ariya Soldwisch said.

With the weather causing it to be incredibly windy, it caused it to be difficult to see where the golf ball went and was also causing the ball to curve as well. The team had a lot of ambition and continued to play the game with a lot of courage and won.

“I’m really glad that we were able to continue the game with a lot of hope, I’m sure that if the weather continues to be like this we’ll still be able to play since a lot of our team members are very confident. I’m really looking forward to our next game,” Soldwisch said.

This was Coronado’s varsity golf team’s last match of the season. However, on October 11th and the 12th they will be play again for regionals at Mountain Falls and states on October 18th and 19th in Reno.

After a 10-game winning streak, the Coronado Cougars faced a crushing defeat against the Faith Lutheran Crusaders. Containing the crusaders during the first half, the cougars had build-ups and opportunities to score. The intensity was high and the fight was strong for the cougars. A zero-zero game at halftime had them feeling energized and ready to score.

“We had great buildups in the beginning of the game,” senior Daphne Egelhoff (#23) said. “Unfortunately, our heads just weren’t in it this game. Now we have a new perspective on our season.”

While Coronado maintained possession for most of the game, they were unable to finish when it mattered. Coronado committed one mistake that cost them the game. Halfway through the second half, Faith Lutheran put the ball in the back of the net off a cross from the wing player, causing Coronado to go down by one. The Cougars could not recover from this: therefore causing their first loss of the season.

“Everyone tried their best, but our legs got tired towards the end and we just couldn’t finish,” senior Misha Yap (#8) said.