Chess Club held a mini tournament on Tuesday, Dec. 12 to practice for the playoffs in January. The team already secured a spot earlier in the season, but they played against Foothill, Desert Oasis, and Green Valley to sharpen their skills.

“We’ve been having a pretty good season this year,” Hanna O-Lee, freshman, said. “A few losses here and there, but overall our team is quite strong with a majority of victories. I don’t mean to jinx it, but I think we can be number one in the district.”

Playoffs will be on Tuesday, Jan. 16, where four teams, one from each division, will compete. Two winning teams will capture a spot in the championship on Tuesday, Jan. 23 at one of the competing schools.

“The championship will be held at one of the schools that makes it to the final round,” Mr. Bzinak, Chess Club advisor, said. “The team has been working hard this season, so I believe we can win.”

Chess club meets on Mondays and Thursdays for casual games in room 819, and students are not required to sign up for the club in order to play. Competitive matches are held 10 times a year, both at home and away. 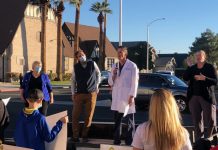