Editor’s Note: On Friday, Sep. 6, the Anchorage School District of Alaska disqualified Dimond High School student Breckynn Willis after she swam and won one of her individual events. Her suit was deemed inappropriate as it shifted during her race, showing too much of her backside according to the unnamed official. However, on Tuesday, Sep. 10, Alaska School Activities Association (ASAA) reversed the action because the coach wasn’t notified about Willis’ unsuitable uniform prior to her race. Due to the recent development in this subject, it is important to inform that this harassment is not something far and uncommon; it occured in our own district.

During high school swim season, swimmers can be disqualified for many reasons: false starts, bad transitions, or staying underwater for too long. However, female swimmers have one extra rule: their swimsuits cannot show too much skin.

At the first meet of Coronado’s swim season on March 9, officials instructed coaches to pull their female team members aside and inform them that a swimmer could be disqualified from an event simply based on how the swimsuit fits her body. This new rule targets a specific sex and the minorities of that group of talented athletes: the bigger, taller, thicker girls.

One problem with this new rule is that officials seem to have forgotten that swimmers are not able to select the perfect swimsuit for their body types. Rather, all team members are required to wear the same team uniform. Any woman who has ever tried on a swimsuit knows that there isn’t a one-size-fits-all, and it is ridiculous to expect that the same style suit will fit a skinny, flat five-foot girl the same way it does a larger, curvier five-foot-ten girl.

During the meet, officials walked behind swimmers before they dove in, and based on their own subjective notion of what was “appropriate,” told some girls to pull their suits down, delaying everyone’s start. The targeted athletes’ focus was drawn away from their upcoming race in order to fix their suits, only for it to return to its original position during the vigorous motions of competition.

While males are celebrated for an athletic build, the same cannot be said for females. Often belittled because of their masculine-like physiques, female athletes are expected to be thin and frail even when they are keeping up with their male counterparts. Female athletes struggle to find a balance between working hard to boost their performance while wanting to conform to the societal standards of what makes a “pretty girl,” and it is one of the hardest struggles they endure throughout their years of competition. They strive to be faster, stronger, and better at their sports, but when looking at their reflections, they can’t help but notice that their broad shoulders, brawny arms and strapping thighs don’t correlate with the slim bodies they see while scrolling through Instagram feeds. Girls are critical enough of their own bodies, and female athletes especially don’t deserve it from sexist judges.

Even if the athletes know that they shouldn’t be treated like this, they endure the inspection, so they can participate in their beloved sport. For instance, Leisel Jones, an Olympic gold medalist swimmer, was publically fat-shamed on the front page of the Herald Sun directly before the 2012 Olympics by male journalist, Paul Kent. Instead of praising her speed and athletic ability, he decided that she would not perform well because of her weight. Most recently, Tayla Harris, an Australian football player, had her picture removed from a sports website on March 19, 2019, because her kicking one leg in the air with the other down was too offensive for some. The sad truth is that female athletes, including female swimmers, have come to expect and accept such treatment.

Imagine if male swimmers were similarly scrutinized and objectified by officials, told that they would be disqualified if their Speedo didn’t fit them in an appropriate way during races or that they were too “brawny” in the comments section of their latest post. Society would have a full-fledged freakout. It is basically guaranteed that the world would go crazy if a male swimmer wasn’t allowed to compete because his suit emphasized his physique. Tweets about the mistreated males would flood the internet because the world won’t stand for their male sports heroes being mistreated.

There was one silver lining to CCSD’s unfair rule. Throughout the first swim meet, female swimmers, both members of their own team and swimmers from opposing teams, supported each other by telling one another when their suits were out of place. They were there for each other like women (and people in general) ought to be.

Athletes dedicate every day to making themselves a better version of what they were the week before. They spend countless hours training and strengthening their bodies to reach their maximum potential. They monitor their caloric intake and eat only the most nutritious of meals. The result of this dedication and hard work is powerful, muscular figures capable of competitive athletic performance. While both male and female athletes deserve respect for what they do, society continues to cling to the double standards for the opposite sexes.

No matter status or age, body type or athletic ability, it seems clear that women are still objectified. It doesn’t matter if they are doing their job or practicing their hobby; they will almost always be judged on their looks. Females are just as big of a part of the athletic community as men, so choosing to focus on their appearance rather than their performance is appalling, especially in high school. Officials shouldn’t even be perceiving underage girls as sexual. If someone finds a female swimmers’ suit distracting, then they need to leave instead of blaming the girl who’s just trying to pursue her passion. It’s time to eliminate this impractical rule or make it fair by applying it to both sexes. Female bodies of all shapes and sizes are beautiful and strong, so if you body shame them, well, you should be ashamed of yourself. 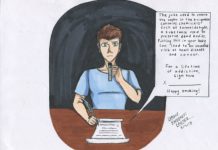 Are you the next nic-addict?