The varsity women’s basketball team won their season opener at home against Silverado 57-36 on Monday, Nov. 30.

Coronado took the lead early in the first quarter when Haley Tyrell, sophomore, Teagan Varrati, freshman, and Payton Caci, junior, all scored. Varrati brought the score to 16 points with a layup halfway through the first quarter. Caci added to the score with two consecutive layups. Silverado scored two with a layup but still trailed 20-17. Abbie Cox, junior, had multiple assists and put another point on the board when she made her free throw keeping the Cougars in the lead 22-19 going into the half.

“I feel happy that my team stuck together throughout the game to pull out the win. To prepare, we all stretched in the locker room and listened to music to calm our nerves before the game,” Haley Morton, freshman, said.

Roy started the fourth quarter off with a layup bringing the score to 46-28. Haley Morton, freshman, played strong defense against oncoming Silverado players. Varrati made a free-throw, followed by a basket from Talia Sapp, junior. Following in the trend of free-throws, Caci made two more, strengthening the Cougars’ lead 53-34. Tyrell made a free-throw followed by a layup, earning Coronado the win 57-36.

“I feel really good about our first win, and I definitely feel confident about our season. As a point guard, I have to run the team, and I feel proud of us today,” Caci said. 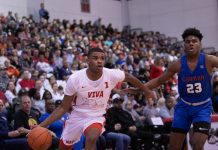 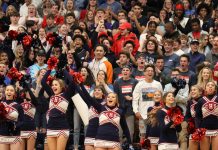 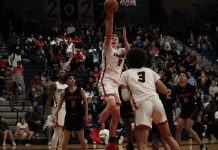