The men’s basketball team recently traveled to Wasilla, Alaska to participate in two tournaments, but they also a learned an important lesson during their 11-day stay in the Land of the Midnight Sun.

In their first tournament, the Doc Larson Roundball Classic, the Cougars went undefeated into the championship game where they lost on a questionable call to Barrow, AK.

With no time on the clock and down by two, a Barrow player shot the ball from half court and missed. Thinking the game was over, the Cougars began to celebrate, but a referee called a phantom foul, allowing the Barrow player to shoot three free throws. He made all three giving Barrow a 77-76 win.

This gave the team something to think about.

“The entire week was great, we should have won the championship, but we learned a valuable lesson,” senior captain Jake Desjardins said.

The second tournament, the 52nd Annual Kiwanis Classic, saw the Cougars go 4-0 with an impressive 73-50 win in the final game against Agura High School to win the championship.

And this time, they waited for the final call before celebrating their victory.

Along with great basketball and a valuable lesson, the team got to experience Alaska by visiting a dog mushing school, going ice fishing and even tasting the local delicacy of whale. 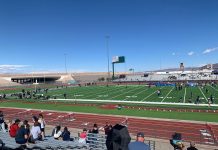