“It was pretty sweet,” Thomas said. “We got to meet Congresswoman Jacky Rosen and her team at her office. She was simply brilliant and charismatic. I really enjoyed meeting her and talking with her. It was truly a remarkable experience.”

Rosen introduced herself, asked them about their inspiration for creating the app and shared her experiences as a programmer before she became involved in politics. After that, she handed certificates to each of the individual members of the Chroma Calendar team, and everyone took turns taking photos with her and each other.

“It also felt good to win and meet Jacky Rosen because it was everybody’s first app,” Daniel said. “I had to learn code for the first time because I’ve never done anything like this before.”

Chen was the only one with any previous coding experience but had to learn app development and a whole new programming language, Swift, and xCode, the free software Apple provides, to complete this project.

“I could have coded an app at any time in my life because the tools are open and free to use, but the pressure of making something for a competition really engaged me,” Chen said. “Working with Thomas, Daniel, and Mia felt similar to a school project, except one where ‘the teacher’ lets us pick our groups. We had a good time, but I was mostly focused on creating the app.”

The four made the app with the full intention of winning the competition. Most of the ideas they had originally brainstormed weren’t possible because of programming difficulties. They targeted color blindness because it was a relatively prevalent disability that they could address. The Kyongs researched color blindness and what is difficult for color-blind users to see so that they could minimize visual ambiguity in the app. There are multiple types of color blindness, so the team had to program the theme and template of the app to fit color blindness universally.

“Creating an app with the mindset of aiding those who are handicapped promotes developer awareness of tech users with disabilities,” Chen said. “I, myself, think more consciously about how disabled users utilize a service because of this experience.”

“It was very easy communicating and working with each other because I was already friends with Thomas and Daniel, and I became friends with Gaelen, too,” Lorenzo said. “It feels great to win the competition because we worked on the app for months, and our hard work paid off.”

Next year, the Chroma Calendar crew will venture to Washington, D.C. where they will present their app to Congress. The official awards ceremony will be held on Wednesday, April 3, and their program will be on display at Congress for an entire year. 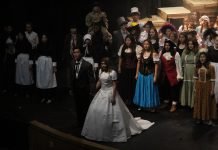 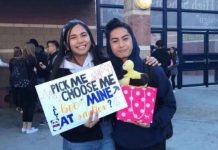 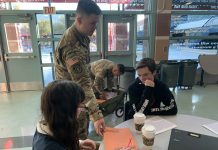