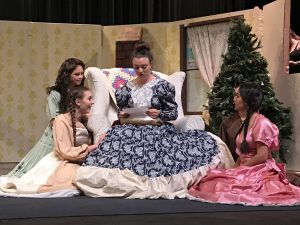 As the fall makes its way around again, theatre students and other student actors will perform their production of “Little Women” during opening night on Wednesday, Oct. 18. The cast is set to act in a string of three shows, closing off the streak with their final act on Friday, Oct. 20.

The production process began during auditions on Aug. 31, where students did cold reads, acted out short segments, and received feedback on their performances. Mrs.Burrows, theatre director, posted callbacks the next day, and the cast began rehearsing immediately after. With only a month and a half to block, memorize lines, clean, and polish, the cast worked tirelessly in order to have the show ready for opening week.

“I think that they’re ready. At a certain point the show becomes theirs and not mine anymore,” Mrs. Burrows said. “It’s up to their own energy levels and their ability to make these characters come to life.”

“Little Women” follows the lives of Meg, Jo, Beth, and Amy March as they live in poverty during the Civil War. Each actor must spend time reading lines, getting into character, and doing their all in the time they’re given in order to ensure a successful show.

“[My character] Beth is super sweet and nice, and I like to think that I’m sweet and nice. She’s always willing to help out, and that’s really who I am as a person,” Kaite Lancaster, theatre IV, said. “I’m a very bubbly person, and I love my best friends with all my heart. I used my life experiences and what makes me a happy person to create a happy aura for my character.”

Tickets are available online at showtix4u.com for $6 or for $8 at the door.