As the season of several fall sports comes to a close, Coronado’s women’s volleyball team was able to snatch a powerful victory at State Finals against Reno High School on Saturday, November 12, 2022. All three sets led to a crushing victory with final scores of 25-9, 25-17, and 25-19.

While Reno had reportedly pulled in quite the supporting crowd, Coronado’s spirits were high as they fought hard to take home the win. The team was quick on the offense with a strong recovery, most notably one Mia Arambula, senior, who was managing defense. Whenever a ball managed to fly past the front lines, Arambula would be there to recover.

Unfortunately for Reno, their defense was not the same. The team was lagging with slow responses, too late to save some incredibly easy hits. Coronado quickly realized this, playing at their dragging speed with shots both distant and near, including one tape ball made by junior Abigail Paulson.

“We worked really well together and came together as a team. In a sense, we sort of used each other to achieve the overall goal of winning State. It wasn’t any individual person, the whole team did great, and that’s how we won,” Paulson said when going over the highlights of the game.

As seen by the scores, Coronado swept the competition, leagues above Reno with point after point. Many were earned during a rally, but several more were thanks to powerful serves from players such as seniors Angelina Sayles and Camdyn Carpenter. The girls hit hard and fast, Sayles managing a total of seven aces throughout the game.

Despite the strong lead, the team never got arrogant, staying focused and holding their ground right till the end. The team was ecstatic about their victory, especially the seniors who would leave their high school years with a successful season.

“Winning state was so amazing and being able to do it with a team that’s really a family makes it so much more worth it,” Carpenter happily explained.

With the conclusion of the volleyball season, many are already growing thrilled at the idea of what next year may bring. Till then, you can continue to show your support by congratulating the team on their hard work and job well done as we wait for what will hopefully be another great season. 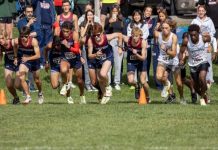